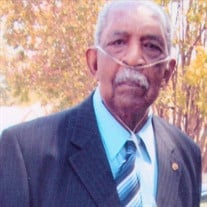 Claude Arnold Williams (Brother Man) was born August 13, 1930 in Austin, Texas to Arnold and Novella Williams. He was the second of five children. He was devoted to his parents and relished the time he spent with his family. He was a lifelong resident of East Austin, attending Rosewood Elementary, Kealing Jr. High and graduating from the original L.C. Anderson High School on Pennsylvania Avenue where he played on the football team. He was brought up in a Christian home with strong family support and encouragement. He accepted Christ at an early age and was baptized at David Chapel Baptist Church under the leadership of Pastor E.G. Gibbs. He later joined Mt. Olive Baptist Church under Pastor H.A. Sneed. He was a member of the Mt. Olive Choir where he led a song title “Jesus in Mine”. He also sang in the Male Chorus. In his later years while at the rehab center, he enjoyed singing when the volunteers came to provide church service on Tuesdays and Thursdays. Some of his favorite hymns were “Amazing Grace” and “Near the Cross,”he loved to sing God’s praises. He loved Pastor Carter and his church family. Claude married Vera Smith, and together, they raise three children, Byron, Carey and Claudia (Neicy). He was very proud of their accomplishments. Claude’s family instilled in him a strong work ethic. He was a hard worker and a good provider for his family. He instilled that same work ethic with his children. He worked for over 31 years at FrosTex Foods before retiring. He also had his own trucking business. He went home to be with the Lord on Wednesday, October 18, 2017. “I have fought a good fight, I have finished my course, I have kept the faith,” II Timothy 4:7 He was preceded in death by his parents, Arnold and Novella Williams; and sister, Lourice Johnson. Those left to cherish his memory; his wife, Vera Williams; three children, Claudia Williams (Neicy), Byron and Carey January; six grandchildren, Byron Reed, Chevale Ross, Jennell Bunton, Donnell January, and their mother, Bobbie January, Carey and Cheryl Johnson; eight grandchildren and four great- great grandchildren; sisters, Corine Harris and Jewel (Wilson) Andrews of Austin, brother, Odis (Marjorie) Williams of Houston, TX; two special first cousins, Earman Sneed of Austin and Patricia Costello of Rio Vista, CA; four nieces, Janice Burleson, Angela McCurry, Julie Rucker and Stephanie Williams; two nephews, Odis Williams Jr. and James Johnson; god-daughters, Melanie Ketebu, Mae F. James and Bertha Redd; other family and friends.

Claude Arnold Williams (Brother Man) was born August 13, 1930 in Austin, Texas to Arnold and Novella Williams. He was the second of five children. He was devoted to his parents and relished the time he spent with his family. He was a lifelong... View Obituary & Service Information

The family of Mr. Claude Arnold (Brother Man) Williams created this Life Tributes page to make it easy to share your memories.

Send flowers to the Williams family.