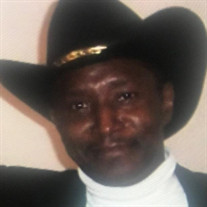 The late great Mr. Charles “Butch“ “Charlie” “Taxman” Edward Miles, Sr., 66, of Austin, TX has closed his eyes and put on his heavenly crown. He was born December 5, 1951 the fourth son of seven children born to the late Elder Jimmy Miles and Mrs. Maude E. (Williams) Miles. He attended Austin schools and was a 1971 graduate of the original L.C. Anderson High School. He attended college at University of Texas and Austin of Community College and was the proud Entrepreneur of Miles Tax Service, C. Miles Construction and C. Miles Entertainment. He fell in love and married the late Patricia Carr-Miles. This union was blessed with a son, Charles Edward Miles, Jr. Charlie was born and raised in the church. He continued this commitment throughout his life. He started each day with prayer and giving thanks. He was a faithful and active member of St. James Missionary Baptist Church. In his past time, he truly enjoyed spending time with family and friends and he took pleasure in cooking and sharing the with others. He had a giving spirit. He could never meet a stranger. He forever had ongoing self-created challenges with home projects (“Mr. Wizard”). Charlie would like to let you know his work here is done. He received a call with an offer he couldn’t refuse for an appointment from which he will not be returning. This appointment comes with a huge sign-on bonus, a reunion with his parents, grandparents, siblings, family and friends he has not seen for a long time. His new mission takes him to a wonderful place where he will be stirring things up. He will continue to bring life to the party, laughter, talking, joking and doing what he does best until his heart is content. If there is a domino table there, he will be at the head of the table. Move over James, Charlie has arrived. A competitor was he. Charlie was preceded in death by his grandparents, parents and two brothers; James and Tommy. He was loved by many and leaves to cherish his memories, his son Charles E. Miles, Jr. (Kimberly), Dimitri (grandson), Nadia Chanel (granddaughter), all of Dallas, Texas, brothers; Floyd Miles (Lois), Anthony Miles (Beverly) of Watauga, Texas; sisters, Margie Miles, Shirley Miles Wren; a special cousin and very dear friend Wadine Miles (Denise), maternal aunts; Georgia Fletcher, Mary Spence, Lucy Swain; and a host of nephews, nieces, cousins and friends.

The family of CHARLES MILES SR. created this Life Tributes page to make it easy to share your memories.

Send flowers to the MILES family.