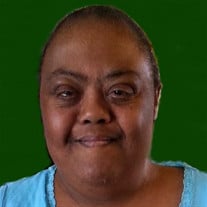 Carol Renee Tasby was born to Lee Andrew Tasby and Joyce Louise Dallas Tasby on December 2, 1958. Affectionately known as &#8220;Nosey&#8221; or &#8220;NaeNae&#8221;, she grew up in Austin and attended the Austin Public Schools. She professed... View Obituary & Service Information

The family of Carol Renee Tasby created this Life Tributes page to make it easy to share your memories.

Send flowers to the Tasby family.