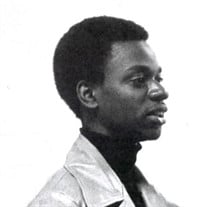 Bruce Lavern Bennett, the son of the late Geneva and Henry Bennett Sr., was born November 21, 1955 in Beaumont, Texas. He was the seventh (baby) of seven children to this union. Bruce was baptized in 1955 at St. James United Methodist Church in Beaumont, Texas and was a faithful member until he relocated. Bruce was a member of Second New St. Paul Baptist Church of Washington, DC. Bruce was a 1974 Cum Laude graduate of Hebert High School in Beaumont, TX. In 1977, he graduated Magna Cum Laude, 1st in his Journalism class from Texas Southern University (TSU) with a B.A. in Journalism and Political Science. While at TSU, Bruce worked at NASA where he recruited minorities and women to enter the field of aerospace technology. He wrote a booklet entitled Opportunities and Careers in Aerospace Technology. Additionally, he established the Juneteenth Scholarship fund for NASA. Bruce’s honors and awards included Outstanding Journalism Senior, Texas Southern University and Who’s Who Among Students in American Universities and Colleges. In 1978, Bruce graduated from the Georgetown University Legal Assistant Program in Washington, DC. He also attended Touro College of Law in New York. Bruce had the honor to intern at the White House for President Jimmy Carter where he coordinated the president’s first news conference for colleges. He also developed a Minority Talent Resource book entitled Minority Computer Databank that is used today by both democratic and republic administrations to assist them in locating highly qualified minorities for their administrations. Bruce was an intern for the late U.S. Senator Lloyd Bentsen (TX) where he researched issues and worked with constituents. He was an intern to the Congressional Black Caucus under Congressman Walter Fauntroy of Washington, DC where he lobbied for the DC full voting and Self Determination Amendment. Additionally, he worked on the Clinton and Obama campaigns. Bruce retired from U.S. Department of Homeland Security in Washington, DC as a Personal Security Assistant. The best way to describe Bruce is by using the first letters of his name: B –Brilliant R- Respected U-Uniquec E-Enjoyable Bruce was preceded in death by his parents and brother Henry Bennett Jr. He is survived by his sisters, Patsy Bennett Strong of Houston, TX, Barbara Bennett McCreary (Samuel) and Constance Bennett-Pollard (Hank) of Beaumont, TX , June Marie Bennett of Washington, DC, his brother Harold Bennett (Maudry) of New Liberia, LA and sister-in-law Priscilla Bennett of Las Vegas, NV. He also leaves to mourn his mentor/friend and author of arabesque romance, Francine Craft. Moreover, he provided encouragement regarding the power and importance of education to a host of nieces, nephews, great nieces, great nephews, relatives and friends.

Bruce Lavern Bennett, the son of the late Geneva and Henry Bennett Sr., was born November 21, 1955 in Beaumont, Texas. He was the seventh (baby) of seven children to this union. Bruce was baptized in 1955 at St. James United Methodist Church... View Obituary & Service Information

The family of Bruce Bennett created this Life Tributes page to make it easy to share your memories.

Bruce Lavern Bennett, the son of the late Geneva and Henry
Bennett...

Send flowers to the Bennett family.