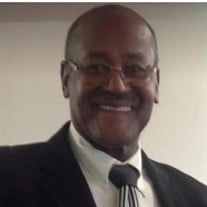 Brock (Honey) Green Jr. was born in Gilbert, LA February 7, 1944 to the parents of Brock and Mary Green. He was the oldest of twelve children. Brock was eighteen when he left Louisiana and moved to Chicago, where he met and married his wife Dr. Mary Tisdale Green. This union brought about four children. Brock was the father of nine total. He and his family left Chicago in 1980 and moved to Austin, TX. He was employed by the City of Austin for 25 years as a Forestry Supervisor, where he built baseball fields, soccer fields and planted trees and flowers all over the city of Austin. This is also where his love for flowers blossomed. He retired from the City of Austin in 2011 at the age of 66. Brock also had a passion for fishing where he would go as often as he could. He enjoyed traveling with his wife and family, leaving only 13 states left for his wife to now journey by herself. Brock solidified his relationship with God 15 years ago at Morning Glory Church of God in Christ, where he stated he went to church just to shut his wife’s mouth and something got a hold of him and he stayed. He served the ministry as an usher and was given the loving title of “traveling usher” because when he would visit other churches, he would dress in his usher uniform or carry his uniform just in case he was needed to serve. He was also a Sunday school teacher. He continued his service as an usher and deacon and was the president of the usher board at All Nations Christian Center Church of God in Christ under pastor Nolan Tracy Mitchell. Brock leaves to cherish his memory his loving wife Dr. Mary Tisdale-Green, one son Tony D. Green, Round Rock, TX ,four daughters Mary Ann Marsh (Joseph), Dallas, TX, Polly Johnson (Donald) Dallas TX, Peggy Chandler-DeLara (Carlos) Dallas TX, April Y. Diaz, Cohoes, NY. Three sons and one daughter preceded him in death. Eleven siblings, Carrie McGee, Betty Hooker (Selman),Shelly Brown, George Green(Willette) Orlando FL, Jim Green(Brenda),Mariah Pierson(Eugene), Mahalia Pierson(Charlies) , John Edward (Ora), Levion Green, Henry Green, Robert Green all of Dallas,TX.29 grandchildren and 34 great grandchildren and 4 great-great grand and a host of nieces, nephews and other family members who loved him dearl

Brock (Honey) Green Jr. was born in Gilbert, LA February 7, 1944 to the parents of Brock and Mary Green. He was the oldest of twelve children. Brock was eighteen when he left Louisiana and moved to Chicago, where he met and married his wife... View Obituary & Service Information

The family of Brock Green Jr. created this Life Tributes page to make it easy to share your memories.

Send flowers to the Green family.