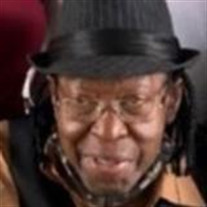 https://www.flipsnack.com/alcbf/booker-bell.html Booker T. Bell, Jr. was born May 30, 1938 in Austin, Texas to Booker T. Bell, Sr. and Bessie Mae Hardin. He was the second of eight children. Booker was educated in the Travis County School... View Obituary & Service Information

The family of Booker T. Bell Jr. created this Life Tributes page to make it easy to share your memories.

Send flowers to the Bell family.