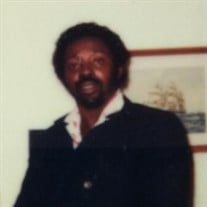 Bobby Ray Crayton was called to be with our Heavenly Father on Thursday, July 5, 2018. He was known to his family and friends as Uncle Bob, Little Bobby, and the infamous “C.E.O. of Booker T. Washington Projects.” He was born June 21, 1952 in Austin, Texas along with his twin baby sister, Lena May Crayton (Mercer). His mother Sis. Stella Crayton (known to many as Mother and Maw Maw) proceeded him in death along with his beloved brother Deacon Claude “Sugarman” Crayton; his aunts Mattie and Lena Elgin, Rosie L. Reed, and uncle James Elgin. He is survived by his children: Regina “Chee Chee” Bailey, Jermaine Brown, Janarius Caro, Terrance, Steven, and Laron Limuel. His five sisters: Lena Mercer, Violet Smith, Mary Burton, Clara Cobble from Austin, Texas and Zora Walker of Las Vegas, Nevada. Two brothers: Pastor Arvy Crayton (Alma) and Ernest Crayton, Sr. His step-sister, Gwen Williams and step-brother, Lawrence Piper; and ex-wife, Betty Green (Jones) all from Austin, Texas. He also leaves behind a host of nieces and nephews in which he truly adored and held very special bonds; other relatives and friends from all over the country. Bobby attended Austin public schools: Austin High School and “Old Anderson” High School. After he graduated, he went on to attend Blinn College. He worked at Giddings State School, Austin State School, and the Austin ISD for many years. Bobby started his Christian journey at an early age. He was baptized by Pastor Robert Lee at First Baptist Church. He later united with Pastor Eulon Brown, Sr. from Loyalty Baptist Church. He had a loving and strong Mother to help spiritually guide him, Sis. Stella Crayton before her death. Every Sunday morning, Bobby would put on his Sunday Best and head for church. He loved spreading the good news to others through his prolific Christian letters he wrote and gave to others. He would make a stop at Walnut Hills Nursing home before he went on to New Light Ebenezer Missionary Baptist Church where Reverend Frank Cage, Sr. serves as Pastor. You could always find Bobby in the congregation stomping his feet and witnessing to the choir and the Word from the Lord. He also worshipped at Unity Hill Baptist Church with his brother, Pastor Arvy Crayton. When Bobby walked into the church, you always knew his presence was there by his actions because he came to praise the Lord. Bobby studied the Bible. He loved the Lord and was not ashamed to testify about the good news. We will miss his happy spirit. He will be in our hearts forever. May his soul rest in peace.

Bobby Ray Crayton was called to be with our Heavenly Father on Thursday, July 5, 2018. He was known to his family and friends as Uncle Bob, Little Bobby, and the infamous &#8220;C.E.O. of Booker T. Washington Projects.&#8221; He was born June... View Obituary & Service Information

The family of Bobby Ray Crayton created this Life Tributes page to make it easy to share your memories.

Bobby Ray Crayton was called to be with our Heavenly Father on...

Send flowers to the Crayton family.