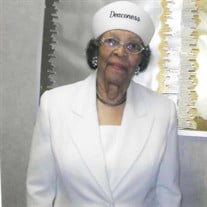 https://www.flipsnack.com/alcbf/deaconess-bessie-kearney.html Bessie Byrd Sharp Kearney was born September 30, 1918 to Mr. and Mrs. Ambres and Hattie Byrd in Montgomery, Texas. She attended school in Montgomery and graduated from Conroe High School in 1936. She joined St. John Baptist Church in 1934 under Pastor J. E. Tabb in Conroe, Texas. She married Rev. Luther Sharp in 1937. To this union, two sons were born, Lawrence and John Roy Sharp. Later she met and married Deacon Carl N. Kearney in 1942. To this union, one son was born, Minister Ambres E. Kearney in 1953. In 1943 she joined Olivet Baptist Church located on St. Bernard Street in Austin, Texas and later joined Mt. Olive Baptist Church located on Leona Street in 1945 under Pastor H. A. Sneed. She was a member of the same Sunday School Class for over 50 years. In her early years, she worked in several leadership positions, Hannah Circle, Mission I, and the Finance Ministry. Sister Kearney worked with the Deaconess, and at the time of her death was the oldest Deaconess and the oldest member of Mt. Olive Baptist Church under Pastor Richard E. Carter. She and Deacon Kearney were married 54 years until his death in 1996. Ms. Kearney attended Madam C. J. Walker Beauty School and was a Licensed Beautician for many years in Austin, Texas. Ms. Kearney is preceded in death by her son, John Roy Sharp, six brothers and sisters, Ambres (AB) Byrd, Randolph Byrd, Sr., Chester Byrd, Hattie Lela Rice, Hazel Richardson, and Lucy Davis. She was the last of her siblings. Left to cherish her precious memories are her sons Deacon Lawrence E. Sharp (Verlinda), Oklahoma City, Oklahoma , and Minister Ambres E. Kearney (Catherine) Pflugerville, Texas, a host of grandchildren, great-grandchildren, great-great-grandchildren, and a host of many relatives and friends. We "Thank God" for a Life Well Lived! Amen!

The family of Bessie Lee Kearney created this Life Tributes page to make it easy to share your memories.

Send flowers to the Kearney family.