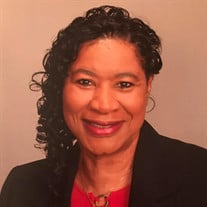 Barbara Ann was the third child born to Ouida Muriel and Clifford Harmon on December 13, 1957 in Dekalb Texas. Barbara would come to know the Lord at a very early age. She initially attended Heglar’s Chapel but found her church home and was baptized with her brother, Clifton at Dekalb Church of Christ on March 12, 1970. Barbara was a member of South Austin Community Church until the time when she would go home to be with the Lord. She attended school and became a proud member of the Dekalb High School marching band, graduating in 1976. Barbara fondly remembered her high school days. She remembered everyone’s name and their family, anything quirky about them, and if you made her laugh, then you can rest assured that we all laughed about it later. Shortly afterward, she moved with the family to Austin, Texas. Barbara was one of the earliest hires of the historic Four Seasons Hotel in downtown Austin. They will never know the monumental sacrifice she made to get to work to support her four beautiful kids. Having to walk an hour to and from the bus stop each day for years. She never complained and always exhibited a fortitude and a spirit that would live up to her nick name of “Mama Kat”. After nearly 15 years, Barbara took a promotional opportunity with the Driskill Hotel in management. All the while supporting her kids, she continued to help her Mother and Father when she was needed. One fateful day while riding that number 37 Colony Park bus she would strike up a conversation with one Byron Wilder… and the rest they say is history. Barbara and Byron would wed February 14, 1998. They would share their lives until God would call his angel home on March 29, 2019. Barbara will be most remembered for her fiery spirit, her love of life, and her love of family. When times got tough she could be counted on to help out. If you were going astray, she would give you a stern word or a kind word to set you straight. Most importantly, when you needed a word of encouragement she would be there to cheer you on. That fire will continue in all of those who were touched by her. Barbara is preceded in death by her grandparents, parents Ouida and Clifford Harmon. Siblings Aundrea Yahoshua, Byron Harmon, Jeffery Harmon, and granddaughter Kearia Richard. Barbara leaves to mourn her spouse, Byron Wilder, her children: Tonya Harmon (Gerome), Damika Harmon (Deon), Negale Harmon (Portia), Kimberly Sterling (Rowan), and Gregory Wilder (Tori). Siblings: Clifton Harmon, Ricky Harmon, Patricia Harmon (Mark), Harold Harmon, Donna Josey (Larry), and Evelyn Nero of San Bernadino, California. Grandchildren: Chelsea, Damasia, Gearia, Alexus, Gerome, Aundoy, DeAmbra, Negale, Rowan, Kyndall, Trinity, Chasitee, Zion, and 7 great grandchildren. And a host of aunts, one uncle, nieces, nephews, cousins, family and friends.

Barbara Ann was the third child born to Ouida Muriel and Clifford Harmon on December 13, 1957 in Dekalb Texas. Barbara would come to know the Lord at a very early age. She initially attended Heglar&#8217;s Chapel but found her church home and... View Obituary & Service Information

The family of Barbara Wilder created this Life Tributes page to make it easy to share your memories.

Barbara Ann was the third child born to Ouida Muriel and Clifford...

Send flowers to the Wilder family.