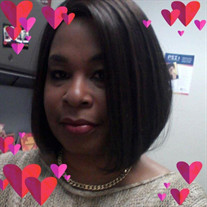 https://www.flipsnack.com/alcbf/arleetha-wash.html Arleetha Wash left a lasting impression on everyone she met with her joyful personality, distinctive laugh, bright smile, caring spirit, and great sense of style and beauty. We will remember her in this way, on this day, as we celebrate a life well-lived. Arleetha began her earthly journey on July 12, 1962, in Ft. Worth, Texas, where she was born to Ben Wash and Ellie Ruth Houston. The next year, the family moved to Austin, Texas, where she began making lasting memories with friends and family, and lived a full and productive life. On the afternoon of Thursday, February 17, 2022, Arleetha transitioned peacefully into Heaven, comforted by friends and family who will miss her dearly. Arleetha grew up as a happy child and could be seen playing outside in the neighborhood park with her friend Tammy Piper and other friends - something that children are not often seen doing today. She possessed many skills and talents including crocheting and knitting and she even knitted herself a “cute pink sweater.” As well, she learned to design and sew her own clothing, a skill she picked up from her mother. At 12 years of age, Arleetha was diagnosed with Juvenile Diabetes; however, she vowed that she would not be limited by its effects, and set her sights on healthy and joyful living. Arleetha attended school in the Austin Independent School District and was an excellent and curious student. She attended Blackshear and Oak Springs Elementaries, Blanton 6th grade center, and Pearce Junior High. It was in high school, that Arleetha explored more of her talents through her participation in the school’s orchestra where she played the violin. She graduated from Lyndon Baines Johnson (LBJ) High School in the spring of 1981, and in the fall of that year, she attended Southwest Texas State (SWT) University where she met some of her best friends. Arleetha was a faithful Christian woman who possessed a love for God that nothing and no one could sever. She began her Christian walk as a child while attending Simpson United Methodist Church. It was there that she was taught lessons about the power of Christ – lessons of faith that would seamlessly guide her into adulthood. Arleetha joined Mt. Zion Baptist Church where she was a member for over 25 years. There, she continued her life as a loyal Christian warrior under the tutelage of Rev. G.V. Clark. She relished each Sunday hymn that was sung and every message delivered. She served the church as member of the Finance Team, and as a chaperone for their Kids Across American youth program. For 17 years, Arleetha worked at MCI in the role of supervisor and trainer. There she flourished and was respected for her knowledge of processes and people. She garnered many awards and was even selected for their elite President’s Club. From there, she transitioned to the State of Texas where she worked for 13 years in many capacities, including working as an Ombudsman II. In this role, she was able to help those who were in great need and she talked about how rewarding it was to be able to do so as a person of faith. Arleetha’s greatest joy was being a mother to her son, Jordan Dominique Wash – he was the love of her life. He recalls how much she “enjoyed teaching him to cook, about cost-effective shopping, and about making the transition into adulthood.” He remarked that “she was insatiably curious, always excited to learn something new, and about how much she loved to cook, bake, and try new recipes. Jordan knew his mother as one who was “ferociously determined and focused on making things happen” – she never sat on the sidelines of life. She worked hard and was solution-focused on achievement and excellence, never settling for less. Arleetha leaves behind her son, Jordan Wash, her mother, Ellie Ruth Evans, her father Ben Wash, her brother Percell Vonrae Evans (Aslyn) and her nephew Jayden Evans. Her brother Malcolm H. Lott, Jr. preceded her in death. She loved family and stayed in touch with her cousins in Dallas. She also had devoted friends. One such friend and work manager, Paige Marsala, offered to donate her kidney to Arleetha for a transplant. Other devoted Christian sisters and friends include Patricia and Tellis Cannon, her neighbor of 25+ years Gwin Robinson, and friends Regina Mitchell and Willie Mae Jones. Her Southwest Texas University sisters and brothers, whom she met in 1981, include Alicia Moore, Angela McCurry, Greg and Maize Hamilton, Jill Drisdale, Jocelyn “Minnie” Walker, and Karla Hill

https://www.flipsnack.com/alcbf/arleetha-wash.html Arleetha Wash left a lasting impression on everyone she met with her joyful personality, distinctive laugh, bright smile, caring spirit, and great sense of style and beauty. We will remember... View Obituary & Service Information

The family of Arleetha Wash created this Life Tributes page to make it easy to share your memories.

Send flowers to the Wash family.