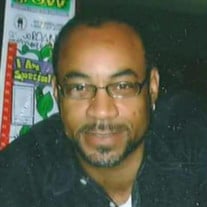 Mr. Anthony E. (Tony) Sodie Anthony E. Sodie was born in Kansas City, Missouri on May 4, 1958 to John Boyd Sodie and Barbara Mae (Scott) Sodie. He was called to rest on June 30, 2018. He attended public schools through the Kansas City Independent School District and was employed for many years as Security for Niecie’s Lounge and Restaurant. In 1975 Tony moved to Austin, Texas with his immediate family and while living here, several of his children were born. He was loved by many and has left a memorable impression on everyone he met. Tony moved back to Kansas City in 1987 to live out the rest of his life and it was here where he gave his life to Jesus Christ as a young man. Tony loved to dance; he would win all of the dancing contest, including a Kansas City 2-Step Contest with his sister Lorraine judged by American Singer Tony Terry. He is preceded in death by his parents, John Sodie and Barbara Sodie-Roe, his aunt Betty Johnson, two brothers, Perry Gines and Johnny Sodie, daughter Chanee Cuington, step-sister Tracey Roe and his uncle and aunt Sonny and Juanita Morgan. Tony is survived by his sisters Penny Allen (St. Louis, MO), Lorraine Barnes and Lynn Curry (Austin, TX), Yvonne Cornley (Willie) Kansas City, Mo), his brothers Charles Gines (Kansas City, MO) and Jeffrey Sodie, Sr. (Austin, TX). He is survived by his children Renee Jones, Andre Center, Crystal Reed, Tamika Smith, Sedrick Johnson, Brandon Moore, Antoinette Sodie (Austin, TX), Jacintha Carter and Joshua Sodie (Kansas City, MO). He is also survived by his step-father James O. Roe and step-sisters Amanda Roe, Brendyah Roe, Alice Roe, Beverly Taylor and step-brother Frank Roe (Austin, TX) and a host of nieces, nephews, other relative and friends. And his forever loving Morgan Family of Kansas City, MO.

The family of Anthony Sodie created this Life Tributes page to make it easy to share your memories.

Send flowers to the Sodie family.