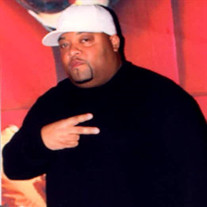 Andre Lanier Davis, Sr. (aka “Big Dre from 12th Street”), was born June 29, 1971 to Joette Davis and Henry Bell in Corpus Christi, TX. At an early age he confessed his faith in Christ and was baptized at Friendly Will Baptist Church, under the leadership of Pastor John Glascoe. Andre received his education in the Austin Independent Schools. Andre was a hard worker at the age of 12. As he grew older he was always creating new business opportunities for himself. He was famous in the Austin Area. As Andre continued his journey in life, his mission was to positively impact the community. Andre had a free and loving spirit with a heart of gold. He'd give you the shirt off his back and the last of whatever he had. He was a self- proclaimed comedian and used his talent to entertain anyone who would listen. His light shined all over the world. Andre spent several years traveling the world and introduced himself with his famed coined phrase, "I'm Big Dre from 12th Street." He was loved by so many people near and far and touched so many lives. His legacy will live on based on the love he's shown throughout his lifetime. Andre was preceded in death by his maternal grandparents: Herbert Reed, Sr. and Josephine Reed. His paternal grandparents, aunt, Doris Reed; uncle, James Reed and cousin, Michael Reed. Andre leaves to cherish his memories, daughter: Grindl Carrington; sons: Andre Davis Jr. and Quinn Ray Davis; grandchildren: Carter Ray Davis and Kai Davis; six God children; mother Joette Davis, father, Henry Bell (Martha); brothers: Carlester Davis, Jr., Horace Davis (Suzy), Charles Davis, Honrē Bell, Jerry Bell, Dante Bell, and Arsha Bell; sisters: Vickie Reed-Davis, Arbor Davis, Patrice Davis and Aquita Bell. He also leaves a host of other relatives, family and friends. .

Andre Lanier Davis, Sr. (aka &#8220;Big Dre from 12th Street&#8221;), was born June 29, 1971 to Joette Davis and Henry Bell in Corpus Christi, TX. At an early age he confessed his faith in Christ and was baptized at Friendly Will Baptist Church,... View Obituary & Service Information

The family of Andre "DRE" Lanier Davis Sr. created this Life Tributes page to make it easy to share your memories.

Send flowers to the Davis family.