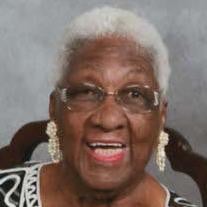 A Rose is another name of beauty and elegance. Its different colors give us a marvelous feeling. Have you ever touched the rose? How smooth and soft it is. Nature created a bag full of beauty in the form of a Rose. It has the power of attracting... View Obituary & Service Information

The family of Ammer Jane Bryant Smith created this Life Tributes page to make it easy to share your memories.

A Rose is another name of beauty and elegance. Its different...