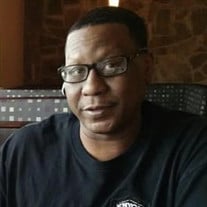 https://www.flipsnack.com/alcbf/weel-ey.html Allen Julius Weekly was born on May 28, 1970 to Dorothy Patton (Weekly) and Allen Julius Aldridge. His school years began in the Austin Public School District attending Blackshear Elementary, Bedichek Middle School, and graduating from Crockett High School in 1989. Allen had a dream of becoming an entrepreneur and made that dream a reality when he opened up AJ’s Barber Shop and clothing store on Airport Blvd. and Manor Rd. AJ’s provided a space that brought joy and catered to many in the community. He was affectionately known as Allen, Al, Nook, AJ, Nookie man, or Man depending on your personal relationship with him. The fun times were plentiful when Allen was around. He could often be found joking, sharing wisdom, or talking about basketball. Allen mastered the game of dominoes and was always ready to play, reading other people’s hands while talking noise in the process. He loved to talk and meet new people everywhere he went. He was always there to lend an ear and give advice to anyone in need. Allen was a cool, laidback, and easygoing person who would give you the shirt off his back. Family was extremely important to him and he enjoyed spending quality time with his kids who were his world. He loved to spend time wrestling, tickling, having water fights, taking them to the park, and teaching them how to play basketball. During summers he would take the kids to the pool every day. Anywhere he would go he would always pull out pictures of his wife and kids and brag about them. Even in his last weeks at the hospital the nurses talked about how much he mentioned his family. He always let his family know every chance he got how much he loved them. Allen was a huge Michael Jordan, Kobe Bryant and Los Angeles Lakers fan. In his downtime he enjoyed watching crime shows like Criminal Minds, NCIS, The Blacklist, and The Mentalist to name a few. He loved making his family watch his favorite movies, The Wood and Daddy’s Little Girls over and over again. He also enjoyed organizing everything and hanging out in the garage while listening to his favorite music. Allen transitioned from this life on Monday, May 17, 2021. His father Allen Julius Aldridge preceded him in death. Allen leaves behind and is survived by his wife Tonya Robinson Weekly along with his children Aaron Willis, Trey Ochoa, Alyson Weekly, Anthony Robinson Weekly, and Adalynn Weekly and one granddaughter Arienne Willis. His mother Dorothy Ruth Weekly. Brothers, Shawn Weekly (Anne Marie) and Anotine Patton (Koula Barsakis). He had six nieces and nephews. Breyanna Weekly, S.J. Weekly, Isaiah Weekly, Antoine Patton Jr., Mayah Weekly, and Amani Barsakis. Allen had a special and close relationship with his Aunt Betty Hoyt and his cousin Toria Hoyt whom he called “Tito”. He also leaves behind numerous cousins, aunts, uncles and close friends.

The family of Allen Julius Weekly created this Life Tributes page to make it easy to share your memories.

Send flowers to the Weekly family.