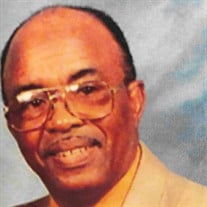 https://livestream.com/accounts/7325565/alfredfreeman Alfred J. &#8220;Freddie&#8221; Freeman was born February 6, 1938 in Austin, Texas to Beulah Landren and J. S. Freeman. He professed faith in Christ at an early age. He was baptized under the... View Obituary & Service Information

The family of Deacon Alfred (Freddy Wolfe) Freeman created this Life Tributes page to make it easy to share your memories.

Send flowers to the Freeman family.