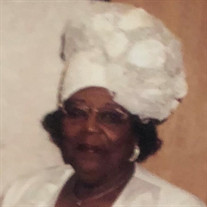 Alberta Nevels Garner was born to the late JB Nevels and the late Lucille Baker of Taylor, TX on January 10, 1930. Due to the unexpected death of her mother, Alberta was reared by her grandmother the late Alberta Baker who she affectionately called “Momma”. Alberta attended Blackshear O.L. Price Public School in Taylor and completed her formal education at Austin Community College where she obtained her GED. Alberta professed Jesus Christ as her Lord and Saviour under the leadership of the late Pastor L.E. Brown of First Baptist Church, Taylor where she remained a faithful member until her passing. Alberta met and married the love of her life the late Pastor Tommie Lee Garner, Sr., March 1964 and together they brought a blended family; Zelma, Bettye, Lucille, Quintos, Bobbie and from this union Tommie Lee Garner, Jr. was born. Alberta’s core values are testaments to her uniqueness. Although not perfect she would often let you know in English or an unknown tongue that God was still working on her. She was undeniably a woman of Faith, Family, Fashion and Friends. Alberta loved the Lord, and did not mind sharing her testimony of The Lord’s goodness towards her. Those who knew her had to listen often as she reflected upon how she had an encounter with God and how he changed her life. No matter how many times you heard this, she was destined to tell it again and again and it was as fresh to her as the day it happened. She always concluded with the significance of the cross as the means of her salvation and “ever since I met Jesus, I’ve reached a turning point in my life”. She was unashamedly born again! Alberta was the Big Mama of the family. Family mattered to her and it was at her house that everybody was somebody special. One of the joys of her life was taking care of her family. She was preceded in death by her parents; her husband, Rev. Tommie Lee Garner, Sr.; daughter Ann Marie Scott; son, Quintos Scott; grandson Tony Woods; granddaughter Sherilyn Washington Brockington; and sister Doris Nevels. She leaves to cherish her memories; her children, Zelma Neal (Austin, TX), Bettye Huff, Lucille and (Rev. George) Winn, Bobbie and (Randolph) Griffin, Tommie (Diane) all of Taylor, TX; 26 grandchildren, 46 great grandchildren, 25 great-great grandchildren; brothers; Chris (Lisa) Smith of Mesquite, TX, Elroy Stoglin, Dallas, TX, sisters; Ruby Turner of Nashville TN, Norma Oliver of Abilene, TX, a host of nieces, nephews and cousins. Adopted daughter Ruby Tealer of Taylor, TX.

Alberta Nevels Garner was born to the late JB Nevels and the late Lucille Baker of Taylor, TX on January 10, 1930. Due to the unexpected death of her mother, Alberta was reared by her grandmother the late Alberta Baker who she affectionately... View Obituary & Service Information

The family of Alberta Garner created this Life Tributes page to make it easy to share your memories.

Alberta Nevels Garner was born to the late JB Nevels and the...

Send flowers to the Garner family.