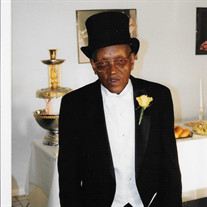 AC Cleveland Sr. was born July 22, 1929 to Rev. Willis Stephen Cleveland and Josephine Manor Cleveland in Waters Park, Austin, Texas. He attended school at Waters Park until the family moved to Pflugerville, where he completed the 8th grade. AC worked for Smith Dairy from sunrise to sundown with a bright future in mind. He met Addie Bernidine Mitchell on April 2, 1949 and married her July 2, 1949. From this union they were blessed with four children; two girls and two boys. AC loved working with animals. His first job after marriage was with The University of Texas Balcones Research Lab, where he took care of many animals from various countries. AC was most proud of his work with “Mr. Sam”; the first chimpanzee sent to outer space. While working for the research lab, AC was injured. He was blown off a company truck. He, however, continued to faithfully work for The University of Texas for 12 ½ years until the project was shut down and moved to San Antonio. He was presented with the opportunity to move with the lab, but thinking of his family, decided not to uproot his children and remained in Austin. Later, another opportunity arose for him and his family to move to Georgia, but he declined and elected to raise his family with his wife in Austin. AC was a visionary and desired to become an entrepreneur. He and Addie stepped out on faith and opened Neighborhood Grocery Store. For 26 years they proudly served the Kings Village Neighborhood. During this time, they refused no one who was in need. AC professed a belief in Christ at the age of 7 years old. He joined St. Paul Baptist Church under the leadership of Rev. Richard Reese and later Rev. Boyd Hansbrough. Under the leadership of Rev. J.H. Penn, he was ordained as deacon and served under Reverands A.R. Hargrove and R. A. Smith. He later joined Mt Gilead Baptist Church where he was accepted as deacon and served under Pastor A. R. Hargrove until his health began to fail. In 2017, Mt. Calvary Missionary Baptist Church accepted him under watch care and made him an honorary deacon. AC's favorite saying was “Let the church be the church." In 1951, AC became a member of Pleasant Grove Lodge and earned the prestigious honor and title of Worshipful Master in 1961. AC served until his health prevented him to serve any further. AC was preceded in death by his father, Willis Cleveland; mother, Josephine Cleveland; four brothers, William Black, Rev. J. D. Cleveland, Charles Cleveland and Leroy Cleveland; three sisters, Beatrice Pearson, Alma Jean Thomas and Marie Washington; his daughter, Jessie Cleveland. AC is survived by his wife of 68 years, Addie Cleveland; daughter Carolyn Powell (Leotis) Hutto; sons AC Cleveland, Jr. Austin and Ronnie Cleveland (Lydia) Pflugerville; 10 grandchildren; 20 great - grandchildren and a host of nieces, nephews and friends.

The family of A C Cleveland Sr created this Life Tributes page to make it easy to share your memories.

Send flowers to the Cleveland family.